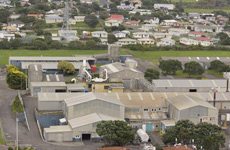 Residents and workers exposed to dioxin from the Paritutu chemicals’ factory in New Plymouth will be able to apply for a state-funded annual health check from July.

The Ministry of Health announced details of the $750,000-a-year scheme in the city last night – but a community group dismissed it as of little value.

Long-term residents who lived near the plant in those years and former plant workers have elevated levels of the dioxin TCDD in their blood.

Dioxins are linked to a range of cancers including leukaemia. There is evidence of links to prostate cancer, type 2 diabetes, spina bifida in the offspring of those exposed, and other diseases.

The ministry says the dioxin levels found in the most-exposed Paritutu residents may increase their cancer death rate by up to 10 per cent above the national level.

The free annual health check from a GP and other health support services will be available from July 1.

The tests are for nearby residents, former plant workers, and others who worked elsewhere in the suburb or went to Moturoa primary school. There are varying criteria for eligibility depending on how long they must have lived, worked or gone to school in the area in the 1962-87 period.

The service will be available nationally. Up to 5500 people may be eligible, of whom half live in Taranaki.

The main aim is to reduce people’s cancer and other disease risks by helping them to quit tobacco (if they smoke), eat well and have enough exercise. Genetic counselling will be available for people to discuss the risks of passing on genetic abnormalities linked to dioxin.

Some will be allowed to have their blood-dioxin level tested, but only if conditions are met, including that it is recommended by a doctor and a mental health practitioner.

The ministry’s deputy director of public health, Dr Fran McGrath, said, “Serum dioxin testing probably isn’t a lot of use to people but if it’s very important to somebody, and if the GP and mental health professional agree, they would be able to be referred for testing.

“While it gives you your current level of dioxin, it won’t tell you your historical level and gives no indication of any level of health risk.”

Andrew Gibbs, of the Chemically Exposed Paritutu Residents Association, said the offer of GP free visits was “an insult, given that the Government knew about this 22 years ago”.

It was a political gesture which was of little value to affected people who were sick.